Last month we had our first i18n Fedora Activity Day (FAD) in Pune, from 20th to 22th November. In Red Hat, Pune office, we hack together for 3 days. It is a really great experience that we collaborate together again.

First we have self introductions and the plans for this FAD.

The first presentation is given by Tagoh-san for Fonts and Rendering in Fedora. Following his topic, I shared my debugging experience about pango, and summarized the status of default Chinese fonts of Adobe Source Han fonts asked by Jens Petersen.

Later, Takao Fujiwara explained IBus 1.6 plans and emoji demo. We discussed about some items of IBus plans. Then I suggested to collect API changes, and discuss more about changed API. And I plan to implement ForwardKeyEvent method for Qt 5 in this FAD.

Mike Fabian gave demos about ibus-typing-booster and emoji-picker. Then Rafal presented his work on locales. Sundeep and Parag showed transtats and transtats-cli demo.

Suggested by Mike FABIAN, I reported `ls -lh` date/time issues to coreutils upstream. Now I got some feedback about it. It is a known issue but seems hard to fix it. The date/time column in English column contains 12 characters, if we add one character for CJK. The column will become too long; if we remove some space characters from date/time string, it will cause some problem in scripts such as cut, sed, awk, etc.

I spend the most time of the day with Takao Fujiwara to implement ForwardKeyEvent method. In the beginning I rebuilt the qt5-qtbase source rpm, but it takes too long time to finish building. Helped by Takao Fujiwara, I start to copy the binary library to the system, it makes debugging faster. Later we discussed the details about the patch, peer review helps to write the patch quickly.

Today we have Fedora 27 release party and nice cake.

The Qt patch seems to work now, we begin to check whether ibus-hangul and ibus-typing-booster work with the ForwardKeyEvent method. The results seems work well, and we submited the patch for upstream review.

I had really nice experience during visiting Pune. Thanks Parag and Sundeep for organizing this event! Thanks to Fedora Council for approving this FAD budget and Bex for helping us with all kinds of budget issues!
Posted by Alex Epico at 10:15 AM 7 comments:

During 3 days, we have various activities, such as discussions and hackathons, etc.

For the first day, Jens Petersen gives a warm welcome and introduction.
And after some other introductions, we know about other G11N teams better.

In the afternoon of day one, with Takao Fujiwara and Daiki Ueno we
discussed ibus future development, such as the differences between ibus and fcitx.
Ueno-san told me about the gnome input method support status for wayland.
And we discussed whether can improve ibus wayland support.

For the second day, Mike Fabian told me there are two ways to package glibc locales:
1. with locale archive;
2. with locales in many folders;

During second day, we use the builtin systemd bootchart module and Michael Meeks' bootchart projects to compare the boot time with two ways to package glibc locales.
This time we mainly tested a few locales installed.

For the third day, we continued with glibc sub-packaging benchmarks.
This time we tested with full locales installed.
The results seems a bit random, but the performance seems not different much.

Finally we have good outcomes from this FAD, and have a nice photo. :) 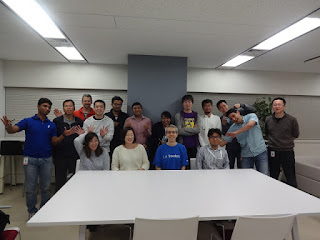 Posted by Alex Epico at 2:33 PM No comments:

How to highlight #if 0 in emacs

In vim, the editor can highlight the #if 0 ... #endif block, which emacs lacks. I did some digs in the web, and find a solution, with some slight modifications.
Here are the Original Post.
Just add the below code snippet to your ~/.emacs:

Posted by Alex Epico at 6:22 PM No comments:

Here are the new change log for novel-pinyin:
* Fixes train factor.
* Fixes file open/close bug in utils.
* Fixes a bug in winner tree,
which may potentially lower the correct rate.

And this package is uploaded to sourceforge today.
The source control system for novel-pinyin has been switched from CVS to SVN. If you want to check out the newest code, please use the new SVN repository.
Posted by Alex Epico at 1:24 PM No comments:

How to prepare a Mozilla Building and Debuging Environment.

The following information is about Firefox 3.0 and mozilla-xulrunner 1.9.0 on SUSE Linux. Please following the steps below:

Posted by Alex Epico at 4:02 PM No comments:

Since February 2009, I was transfered from i18n team to Mozilla team in Novell.
Although it is a tough task, but it is also interesting to me.

Recent months I am very busy, thanks for the help from Wolfgang. Later maybe I can spend more time on making patches. :)

As I spend lots of time about how to debug Firefox bugs on SUSE Linux. I will write some series of articles to ease others to join developing Mozilla Firefox on SUSE Linux.
Posted by Alex Epico at 3:28 PM No comments: